Author of the “virus.mp3” proof-of-concept, which he posted to comp.sys.mac.programmer.misc on March 20.

Verdict: Blameless. Lindbergh’s proof-of-concept is completely innocuous, and the technical details of his technique are quite clever. If there’s anything he should have done differently, it’s the unfortunate name he chose for his demo. “virus.mp3” is not a virus — it’s a Trojan horse. A file name such as “example.mp3” would have been better. But, I suspect Lindbergh never imagined the hubbub his demo ended up provoking.

Due to the use of this technique, users can no longer safely double-click MP3 files in Mac OS X. This same technique could be used with JPEG and GIF files, though no such cases of infected graphic files have yet been seen.

Which just isn’t true. “virus.mp3” is an application, not a document, at least in terms of how the Finder treats it on both Mac OS 9 and OS X. An accurate, non-sensational way of issuing their warning would have been to say something like: A malicious application can be disguised using an icon to make it look like a document.

Mac OS X displays the icon of the MP3 file, with an .mp3 extension, rather than showing the file as an application, leading users to believe that they can double-click the file to listen to it.

This is false. It’s either a deliberate lie, or written by someone with no genuine understanding of what’s going on. Either way, it discredits Intego.

This is how the Finder displays the “virus.mp3” file, in list and column view: 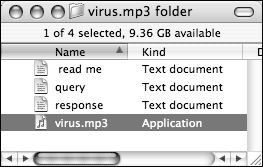 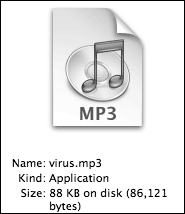 There’s no question that one might be fooled into thinking it’s an MP3 document, glancing only at the icon and filename, but in no way is the Finder erroneously indicating that it is anything but an application.

The April 10 issue of MDJ (and the April 11 issue of its weekly sibling MWJ) contained an exhaustive look at the entire saga, including an outstanding explanation of the CFM trickery Lindbergh used to stash both the executable binary code and MP3 data within the data fork of a single file, analysis of the embarrassing factual errors in Intego’s statements, and a scathing look at the press coverage.

(Disclosure: I was an occasional contributor to MDJ in 2003.)

Verdict: Everything a Mac user ought to know about the threat of Trojan horses.

Leander Kahney’s initial report was headlined “Trojan Horse Attacks Mac OS X”. This is so wrong, so sensational, as to defy belief.

To Kahney’s and Wired News’s credit, the initial report was later replaced by a new article, headlined “OS X Trojan Horse Is a Nag”, which corrected the original article and began by putting the situation in an accurate context:

Security experts on Friday slammed security firm Intego for exaggerating the threat of what the company identified as the first Trojan for Mac OS X.

(Credit to MDJ for finding a working link to the initial Wired News report.)

Verdict: The initial report was the most sensational and least accurate coverage I saw. They did the right thing by correcting themselves within a day, but that doesn’t excuse the utterly misleading initial report.

Update: Chris Nandor emailed to point that CNN’s coverage was even worse than Wired’s, and went uncorrected. Here’s the first sentence from CNN’s article:

The first Trojan horse virus to target Apple’s latest operating system was discovered this week, and it appears to prey on the popularity of Apple’s popular music service.

MacFixIt completely botched its (non-bylined) report. MacNN, MacCentral, MacObserver, and MacMinute all did nothing more than regurgitate bits from Intego’s inaccurate press release, and passed it along without the scrutiny it deserved.

Linking is not reporting. If these sites are news media, as they all claim to be, and not merely clearing houses for press releases, then they are obligated to investigate claims such as Intego’s before publishing them. Does this mean they might get scooped by less scrupulous “news” sites, which jump the gun to publish a sensational “Trojan horse scare for Mac OS X” story? Sure. But credibility stems from accuracy, not immediacy.

The vast majority of the news blurbs published by these sites don’t demand investigation. An alleged security hole, however, is anything but a typical story. MacCentral’s Jim Dalrymple did contact Symantec for comment, but another vendor of commercial anti-virus/security software isn’t where you go to get unbiased analysis of a Trojan horse threat. These companies have a vested interest in convincing Mac users that they need anti-virus software.

The core of the story, missed by all of the above Mac news sites, is that Mac applications can have icons and file names that make them appear at a glance to be documents. You don’t need anti-virus software to defend against this threat — you simply need to be careful that documents you download from untrusted sources are, in fact, documents. The Finder can tell you this.