Mux is video infrastructure for developers.

Yusuf Mehdi, corporate vice president of MSN, in an interview published today in the Seattle Times:

Q. Is this something Microsoft decided to do because of Apple and iTunes?

A. We definitely would have done this on our own. We were on a path already to provide great music services and so the Apple effort didn’t really change what we would have done.

No, of course it’s not in response to the iTunes Music Store. Why, I’m sure they even decided on the name of their weekly email newsletter years ago: 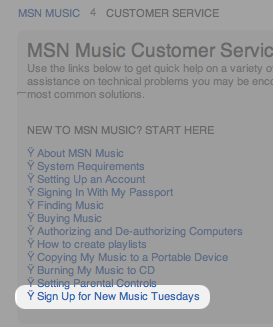 I mean, what’s Microsoft supposed to do? Release their new music on Wednesdays?

(Thanks to Jesper for the link.)

A bunch of readers have informed me via email that, for reasons which are apparently unknown, Tuesday has long been the day when the music industry releases new titles. So my “Release their new music on Wednesdays?” crack about the day of the week is off-base, but come on — the exact same newsletter title?

[One last update: Reasons unknown no longer. Ask Yahoo: “Why do record companies release artist albums on Tuesdays?”. Thanks to Konstantinos Christidis for the link.]

While I’m appending a postscript, it’s also worth pointing out the subsequent questions in Mehdi’s Seattle Times interview:

Q. Why not the first out?

A. Apple had already gotten out before we had even thought about doing our own particular service. We weren’t going to be first regardless.

So then the question was, how quickly do we need to get out? Do we need to respond in three months or should we take our time and build a great service on our own plan, and that’s what we decided to do.

Q. When did you decide to sell music?

A. A year ago. We actually sat down with Bill (Gates) and Steve (Ballmer) because they were involved in the decision. It’s a big decision to go to the point where we’re actually selling music directly. We talked to them about it a year ago and we went back and forth on it. We showed them a prototype of what we thought we could deliver, and I think that really blew people away.

Both of which answers seem to contradict the first, that they were “on a path already to provide great music services” before the ITMS.