Thanks to the numerous readers who sent in additional observations on Mac OS X poofery, I offer the following addendum to last week’s bit on poof consistency.

Safari doesn’t have a poofable Cocoa-style toolbar, but it does offer poofing from its Bookmarks Bar. You can drag URLs to the Bookmarks Bar to add bookmarks, and you can drag them off to poof them.

The only good thing about this is that Safari makes poofing undoable. Otherwise, it’s a bad idea because it breaks the unwritten rule that poofing is non-destructive, removing only a reference to a thing, not the thing itself.

[Update #1: Lots of email from readers making the argument that bookmarks aren’t data, but rather references to web sites, and thus that Safari’s poofing is appropriate. That’s reasonable, but doesn’t take into consideration bookmarklets/favelets — which are little bits of JavaScript code, not references to web sites.]

Menu extras are the little iconic menus at the right side of the menu bar — e.g. iChat’s status menu, or the system-wide Script menu. To remove one of these menus from the menu bar, you can poof it by Command-dragging it anywhere off the menu. (You can Command-drag within the menu bar to rearrange them.)

One difference between menu extras and other poofables is that you can’t use drag-and-drop to get them there in the first place. The way to turn a menu extra on varies widely from extra to extra. iChat’s is controlled by a checkbox in iChat’s preferences window. The AirPort status menu can be turned on in two places: the Network panel of System Prefs, or the AirPort panel in the Internet Connect app. The Script menu extra is turned on by launching the Install Script Menu applet in the ‘/Applications/AppleScript/’ folder. This isn’t a complaint, per se, just an observation.

[Update #2: A few readers emailed to point out that you can install Apple’s menu extras using the .menu bundles located at ‘/System/Library/CoreServices/Menu Extras’. But using the Finder, you can’t install them by drag-and-drop — you need to double-click them. Oddly enough, however, is that you can install them by drag-and-drop using CocoaTech’s PathFinder.]

Apple’s Disk Utility app has a sidebar listing all of your currently mounted disks. The sidebar can also contain recently-used disk image files, and you can drag a disk image file into the sidebar to keep it there. But how do you remove an image from Disk Utility’s sidebar?

There is no menu command to remove a selected image. Nor is there a contextual menu command. Dragging an image from Disk Utility’s sidebar to the Trash seems like a good guess — and the Trash even highlights to indicate it will accept the drop — but when you let go, the image simply snaps back to the Disk Utility sidebar.

Poofing is the only way to remove a disk image file from the Disk Utility sidebar. Judging from my email, this is utterly non-intuitive. Worse, the only way to poof an image in Disk Utility is to drag it out of the sidebar, and then drop it anywhere else within the main Disk Utility window. In all other poof implementations, you can drop anywhere on screen, like, say, the desktop.

Last but not least, here’s a spot where poofing ought to work, but doesn’t — with potentially disastrous results.

The Finder’s Find dialog (in 10.3) has several search panels. The most flexible is the “Specific places” panel, which allows you maintain a list of frequently-searched folders and/or volumes. 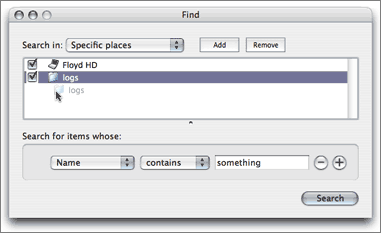 The “Add” and “Remove” buttons do just what you think — adding and removing places to the list. You can also add items to the list by drag-and-drop. Drop a folder in the list, and it stays there for future searches.

But, bizarrely, drag-and-drop does not work for removing items from the list. Instead, dragging a folder out of the list moves the original folder to wherever you drop it. This includes dropping items on the Trash — a gesture one might reasonably assume would simply remove the folder reference from the list.

Remember, this is not the results window of a search — it’s the Find dialog itself. This list of specific search places is exactly the sort of list-of-references where Apple typically uses poofing to remove items. That you’re instead dragging a reference to the original folder is both unexpected and dangerous.

Drag-and-drop works to add items to the list, but the only way to remove an item from the list is to use the Remove button.