Ever since I re-announced the availability of super-deluxe Daring Fireball T-shirts back in October, I’ve been backlogged on shipping them out. As of this writing, I’m pretty much caught up. The last batch of non-U.S. shipments didn’t go out until this week, however.

The membership system is the first prong in the plan, and while the results to date have exceeded my expectations, membership revenue still falls far short of a salary. There are continually more things I want to write about than I have time to write. The math is simple: the more readers who support this site by becoming members, the more time I’ll be able to spend writing. I can’t emphasize enough how much every membership counts.

Plus, the T-shirts are pretty damned cool: 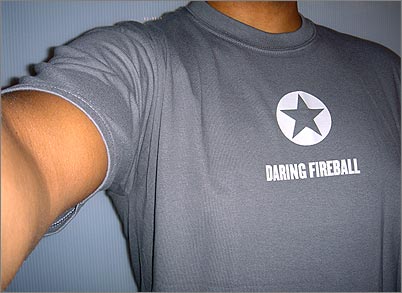 Although in terms of coolness, it’s going to be difficult for anyone to top Eric Case, who, incredibly, took his T-shirt to the summit of Stok Kangri, a 20,000-foot-high mountain in northern India. I don’t even know Eric. He just thought his DF shirt would be a cool thing to take along to the Himalayas. 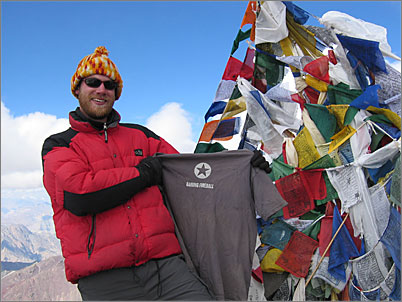 One perquisite of membership is access to Daring Fireball’s members-only RSS feeds (one containing the full content of regular articles, the other for the Linked List). According to my logs, these feeds are pretty popular:

Plus, next week I plan to test the waters with a mailing list for readers to discuss Daring Fireball-related topics. I’ll have more to say about this when it’s ready, but for now, the important thing to note is that subscription to the list will be limited to Daring Fireball members. One reason for this is that it will hopefully have a positive effect on the signal-to-noise ratio on the list; the other, of course, is that I’m hoping it might spur more I’ve-been-thinking-about-joining fence-sitters to join. Become a member now, and you’ll be able to sign up for the mailing list as soon as it’s announced.

The intention isn’t that these members-only perquisites are, in and of themselves, worth the price of a membership. What’s truly valuable here is the content, and that is free for everyone. Becoming a member is a way for you to support this free content, and the members-only features are token rewards for doing so.

And, for what it’s worth, for those of you who aren’t interested in the T-shirt, I’ve dropped the price of a one-year membership to $19.

The second prong of my business plan (such that it is) for this site started in September, when I began selling my own sponsorships. This too has gone well, and I’m deeply appreciative to each of the following sponsors:

I’d like to especially thank Jim Coudal and his colleagues at Jewelboxing, makers of extraordinarily clever DVD and CD packaging systems. Jewelboxing was on board as a sponsor from the get-go, and they’ve sponsored the site every day since.

These are all products which I’m proud to promote, and it warms my heart to see that sponsors are willing to embrace my thinking with regard to the design and placement of web-based advertising. By keeping ads relatively small, text-based, and non-animated, they’re noticeable without being distracting.

A couple of spots are available for February (and thereafter). The policies remain:

Lastly there is this, about which you can read more at the BBC News web site, of all places.