I’ve often downplayed the Microsoft-Apple rivalry. In large part this (my downplaying of the rivalry) is a reaction to the way that the mainstream tech press has, for nearly two decades, overplayed it.

But there’s no denying the fact that they are, for lack of a better term, orthogonal rivals. Windows and Mac OS always have been and will be compared against each other. The companies themselves are stark contrasts, as are their respective co-founders/leaders, Jobs and Gates. They produce software of almost completely opposite strengths and weaknesses.

And, it seems to me, the two companies’ fortunes often seem to be at odds.

Microsoft spent the ’90s growing from a successful software company into an industry-dominating titan. Apple spent much of the ’90s fighting the perception that it was on the verge of going out of business.

So far in the ’00s, however, things have swung the other way. Apple is firing on all cylinders — the whole iPod/iTunes thing, Mac OS X, the so far very successful transition to Intel processors — and Microsoft… well, what is the deal with Microsoft? They’re certainly not doing poorly financially; they booked $3.89 billion in profit — profit! — in their most recent quarter. That’s more than $1 billion in profit per month, and an 18-percent increase over their profit from the same quarter a year ago. But their stock price dipped on the news, because analysts expected even more. Their stock, in fact, has been mostly flat since 2002, and other than a spike at the tail end of the dot-com boom, hasn’t moved much since 1998.

It seems almost beyond dispute that there’s a deep malaise surrounding Windows Vista, Microsoft’s biggest and most important upcoming product. Microsoft has been late with major new operating systems before — in fact, to my memory, major new versions of Windows have always arrived a year or two later than they were originally promised. The biggest problem with Vista isn’t that it’s late, but that people don’t really seem to care that it’s late, because there doesn’t seem to be much in Vista that Windows users are dying for. (Most of the cool features were cut during the development process.)

At least from my perspective here on the Mac side of the fence, it just doesn’t look like Windows Vista is going to offer much, if anything, to make Mac users envious.

This isn’t gloating. Quite the opposite, in fact. Another reason I’ve generally shied away from banging the Apple-vs.-Microsoft drum here on Daring Fireball is to avoid falling into the all-too-accurate stereotype of the Microsoft-bashing Mac enthusiast. I understand the urge to root against Microsoft, the urge to gloat over their problems, the desire to see them suffer in the market.

In the very worst tradition of punditry, allow me to make a sweeping generalization based on a few almost completely unrelated observations: Microsoft is suffering from a lack of confidence, and Apple is brimming with it.

It is, admittedly, a cliché, but Microsoft is clearly a victim of its own staggering success. What they’ve done best, historically, is kill and/or neuter their competitors. That’s why they’re gearing up for a fight against Google; Microsoft, as a company, defines itself by its rivalries. They relegated early PC peers like WordPerfect, Lotus, and Borland to relative obscurity; then, famously, they outright obliterated Netscape.

Most of the criticism of these ads revolves around the fact that it’s a bad idea to insult your own customers. But what I found interesting about them is the tacit acknowledgment that Microsoft’s strongest competitor in today’s office software market isn’t OpenOffice, or any other competing suite from another company, but rather the Microsoft of a decade ago.

The problem with Google, as an “enemy” for Microsoft, is that Google is even less of a direct rival to Microsoft than Apple is. Microsoft sells software. Google does not sell software. The only way for Microsoft to “beat” Google is for one of the two companies to enter the other one’s market. Google doesn’t seem the least bit interested in selling operating systems or office software — and even if they do eventually enter those markets, it would likely be with software they give away in order to generate advertising revenue. Microsoft’s previous corporate rivals were companies that helped Microsoft focus on its core competency: selling and developing PC software. Obsessing about Google draws them away from that focus.

Which leads me to the aforementioned observation from which I drew the conclusion that Microsoft has a confidence problem — this full page ad on p. 33 of the 22 May 2006 issue of The New Yorker: 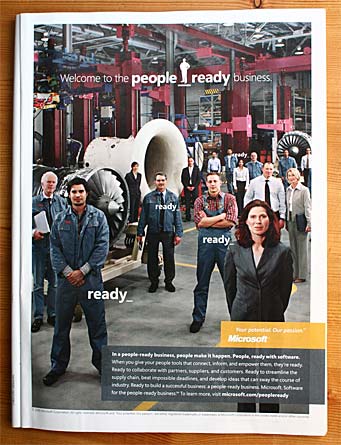 I’ll reproduce the text of the ad below, but I’ve posted a much larger copy of the image over on Flickr so you can examine it yourself.1 The ad reads:

Welcome to the people_ready business.

Please note: I venture into the following criticism knowing perfectly well that there is nothing more trite than a Mac nerd mocking Microsoft marketing material. But here goes:

What the hell does any of this even mean?

And what’s the point of the decorative underscores — the “people_ready” in the headline and the four “ready_”s tagging some of the people in the photo?2

This ad epitomizes everything that’s wrong with Microsoft: they have nothing new to offer. There’s nothing wrong with branding ads; I like branding ads (e.g. Nike’s “Just Do It” and Apple’s “Think Different” campaigns). But if this “people_ready” ad is supposed to be about their brand, what is the message? The only message I can suss from it is “Buy Microsoft software just because it’s Microsoft software.” They would be better off running an ad that literally reads “No one ever got fired for buying Microsoft” — at least that would be bold.

I’m sure that when Vista and Office 2007 finally ship, Microsoft will run plenty of ads touting tangible features of these products. But this ad reeks to high hell of “We’ve got lots of money in the ad budget but no new products to advertise, so we’ll buy some ads that say nothing at all.”

This ad is almost offensively timid. And “timid” is not a word normally associated with Microsoft — or any thriving company, for that matter.

Apple and the New MacBooks

A few months back, in “iPod Juggernaut”, I emphasized this quote from Steve Jobs from a Newsweek interview two years ago, regarding the Mac’s relatively meager market share:

If that’s so, then why is the Mac market share, even after Apple’s recent revival, sputtering at a measly 5 percent? Jobs has a theory about that, too. Once a company devises a great product, he says, it has a monopoly in that realm, and concentrates less on innovation than protecting its turf. “The Mac-user interface was a 10-year monopoly,” says Jobs. “Who ended up running the company? Sales guys. At the critical juncture in the late ’80s, when they should have gone for market share, they went for profits. They made obscene profits for several years. And their products became mediocre. And then their monopoly ended with Windows 95. They behaved like a monopoly, and it came back to bite them, which always happens.”

My point then was to emphasize how with the iPod, Apple is going for market share, not per-unit profits: iPods tend to cost less than comparable products from other companies.

But this sort of “guard the profit margins” strategy has in many ways continued to undergird Apple’s Mac strategy in recent years. I always liked Apple’s iBook laptops, but it was often quite obvious that Apple crippled the machines in certain ways so as to protect the sales of higher-profit PowerBooks. Examples:

Not so with the new MacBooks. For $1099, you can get a MacBook today that’s almost every bit as good as the $1999 MacBook Pro that first shipped just three months ago.

The differences between the MacBooks and MacBook Pros are simple and obvious: bigger screens, more ports and an expansion slot, backlit keyboards, and a different case finish. Other than for high-end video (and gaming, which today is more video-card-dependent than processor-dependent), performance is not a differentiating factor. MacBooks are fast.

A more cautious decision would have been to equip the MacBooks with the slower Core Solo processor (as used in the Mac Mini), maintaining a similar relative performance gap between the MacBooks and MacBook Pros as there was between the iBooks and PowerBooks.

I don’t see how anyone can doubt that there are many people who, if the MacBooks had shipped with Core Solo processors, would have bought a MacBook Pro but who will instead now buy a (cheaper, less profitable) MacBook instead. The $1099 MacBooks arguably offer the most bang for the buck in any Mac that Apple has ever shipped.

Apple, it seems clear, is confident that they’re going to make it up in volume.

I offer this juxtaposition between Apple and Microsoft simply as an interesting contrast.

Confidence can lead to arrogance, both in individuals and in organizations, but I don’t see that happening with Apple today. It was arrogance in the ’80s when the Sculley regime maintained almost absurd profit margins on Macintosh hardware. Today, Apple’s confidence is leading them to lower their prices, not raise them.

It’s also leading them to simplify their product line. The new MacBooks replace both the entire iBook line and the 12-inch PowerBook.3

Maybe the lesson here is that you can’t make a billion dollars a month in profit with a simple line of simple products. What I’d like to think, though, is that the lesson is that good design can be good business.

Microsoft, in contrast, plans to offer Windows Vista in seven different editions: Starter, Home Basic, Home Premium, Professional, Small Business, Enterprise, and Ultimate. The names read like something out of The Onion.

Or perhaps they’ve always had such values, but are only now succumbing to the weight of the complexity of their systems and processes. Derek Denny-Brown (a former Microsoft technical lead) offered this insightful assessment of Vista’s development a month ago:

Anyone who has read any modern management book (or lived in the trenches) [knows that] more people does not equate to more features. […] Vista isn’t neutered and delayed because of any lack of people. It is a mess because of middle management. In a large project, complexity is a logarithmic on connections. 3 projects is 2× as complicated as 2 projects…. roughly.

It gets worse. At least at the time I left (6 months ago), I saw very little evidence that the management of these failed projects was getting any kind of a slap on the wrist. The problem is that in an org that large with that [many] dependencies, it was impossible to tell which team was actually mismanaged, and which team just was dragged down by the other mismanaged teams.

This is how a company with so many talented programmers can spend six years developing an operating system that no one is excited about.

Upton Sinclair wrote, “It is difficult to get a man to understand something when his salary depends upon his not understanding it.”

That’s why it’s so hard for a company to break out of a slump induced by poor management: the only ones who can address the problem are the managers themselves.