Vacation, All I Ever Wanted

We’re on the boardwalk in Wildwood, New Jersey. It’s just past 9 pm on a beautiful Thursday night at the end of a beautiful week of August shore weather. The boy, however, is out of sorts, in the way that two-and-a-half-year-olds who’ve skipped their naps and spent the day digging holes in the sand at the beach are wont to be.

The problem, more or less, is that the boy both wants and does not want to go on what he himself has named “the boat ride”: a toddler-demographic carousel-like ride consisting of a motley assortment of vehicles, including a race car, an old VW van, a few dune-buggies, some horses, and, oddly, amidst all this silliness, a lone howitzer-looking military vehicle. And one small blue boat, apparently both water-and-road ready. Most of the vehicles hold three or four passengers (or perhaps “drivers” is a better word, given that each seat on each vehicle has its own steering wheel, for reasons that should be obvious to anyone who has ever spent time with a toddler).

And so the conundrum is that if we guide him anywhere away from the boat ride, he adamantly insists “No, no, go on the boat ride”, but each time I get in the boat ride line with him, he insists in even more certain terms that he does not want to go on the boat ride. He was on this same ride one night ago and loved it, and has spent the entire week riding similar attractions with reckless abandon.

There is only so much of this that even the most accommodating and patient parents and grandparents can take.

And so a compromise is brokered. We’ll all go back to our room, three or so blocks from the boardwalk, and if the boy can regain his composure and is still interested, we can then come back to the boardwalk for one more spin on the boat ride. This is, of course, a sucker deal, given that the root cause of the boy’s current petulance is that he’s over-tired. Away from the lights, crowd, and cacophony of the boardwalk, he’s certain to fall asleep.

Or so we think. After a trip to the potty and a deep, focusing breath, the boy announces his intention to “go back for boat ride”. My wife Amy, who is herself exhausted and still needs to finish packing our bags for the late night vacation-ending two-hour drive back to Philadelphia — which we need to do tonight because I’m catching a flight to California in the morning — gives me a look that asks “Will you take him?”

Of course I will. A deal’s a deal.

As per the boy’s request, we forego the stroller and I carry him back to the boardwalk. (That is also how we got back to the room from the boardwalk.) In line for the boat ride once again, the boy seems to have it together this time. The delicate part here, though, is that of all the aforementioned vehicles (and animals) on the carousel, the boy is only interested in one: the boat. And so placement in line is key: if a whippersnapper ahead of us chooses the prime seat at the front of the boat, we’d be stuck either choosing another vehicle or waiting for the next cycle of the ride, neither of which options, I suspect, the boy will handle well in his current state.

There are six kids ahead of us. Several seem to be siblings, who tend to occupy multiple seats within the same vehicle. At the end of the line is a woman with a stroller. In the stroller is a baby who appears to be about a year-and-a-half old. The woman is videotaping the current cycle of the ride. It is unclear whether they are in line to go on the ride themselves, or if she’s simply chosen an ever-so-slightly inconsiderate spot from which to tape her son who is currently on the ride.

I suspect they are not in line, but I queue behind them rather than ask, so as not to interrupt the recording. A few seconds later, a heavyset woman about my age (i.e. 30-ish), accompanied by her son (who appears to be about the same age as Jonas, i.e. 2-3), approaches the line, eyeballs the videotaper-with-stroller, then looks at me and Jonas, and decides to slyly stand where she is — perpendicular to the line, but in front of the videotaper-with-stroller. I immediately suspect she’s planning to cut in front of us.

So the ride ends and the current crop of riders begin exiting from the ride. The woman with the video camera is yelling in Spanish at her son, who is still on the now-motionless ride, dancing on the hood of the car in which he’d been riding. I do not understand what she is saying, but I would wager it translates to English as “Get down!” He jumps off the car and heads for the exit.

The heavyset woman (i.e. the suspected line-cutter), having overheard my question and the videotaper-with-stroller’s response, answers me as well: “He’s in line.” The “he” being her son, and the clear implication being that he’s not only in line, but in front of us — despite the fact that she made eye contact with me when they originally approached the line; i.e. she not only knew that we were in line before them, but she also knew that I knew that she knew this. Her eyebrows are raised and her face bears a smug you-shouldn’t-have-gotten-behind-that-woman-with-the-video-camera smile.

There is a certain camaraderie amongst the parents of toddlers in an amusement park environment, and I am, in general, an easy-going fellow. If this particular ride were, like many others targeted at the toddler demographic, comprised of a series of identical or nearly identical vehicles/vessels (like, say, a traditional merry-go-round’s horses, or a battery of identical race cars) I’d have graciously waved her and her son ahead of us. But this ride has just one boat, and a seat in the front row of that boat is, at this moment, the only thing my boy wants, and, I suspect, getting that seat on this next cycle is the only thing holding him together emotionally.

But I say nothing to the woman.

Instead, I summon all the frustrations of the last 90 minutes: the crying, the carrying, my attempts to reason with Jonas while he simultaneously desired both to go on and not to go on the boat ride — and I imagine how things might play out if I were to allow this unabashed line-cutter and her son to board the ride ahead of us and they were to choose that blue boat.

I say nothing but I think about these things, and I look her in the eyes. I say nothing because the only thing I can think to say is “If you think you’re getting in front of my boy you’re out of your fucking mind.”

I walk past her, holding Jonas, to our rightful place in line, and the smug smile disappears from her face. She says nothing further.

I hand three tickets to the attendant and carry Jonas toward the boat, which, thankfully, was ignored by the children ahead of us. Jonas takes his seat, and I ask him whether he wants me to stay. He’s been riding by himself on this and other similar rides all week, but this time he says, “Daddy stay with me.” And so, of course, I do. There’s a bench circling the central axis of the carousel, obviously intended for just this purpose. Jonas says, “No, here”, meaning here in the boat with him. I explain that I won’t fit in the boat, but that I’ll be here on this bench, close enough that we can hold hands. I show him, by holding out my left hand. He clasps my index and middle fingers, and that is good enough.

The ride starts. Jonas seems neither scared nor happy. It doesn’t seem possible that a boy could be this tired but still awake. While the ride spins I snap pictures — one-handed, since my left hand remains firmly grasped by Jonas’s right. This grip is the only attention he pays to me throughout the ride.

The ride slowly winds down and comes to a stop, and I scoop the boy out of the boat. I hold him and I start walking toward the boardwalk concourse. “Let’s go home,” I suggest. I’m braced for the worst, worried that he’ll ask for “one more ride”.

But I needn’t have doubted him. “Go see Mama,” he says. He’s too tired to be happy, but he is satisfied.

I squeeze him and kiss him, and I carry him home. 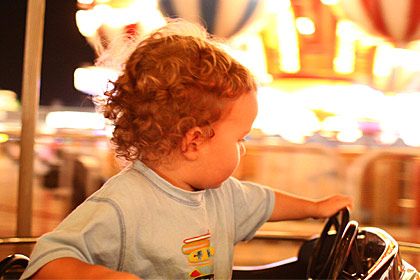