Would Apple Mix DRM and Non-DRM Music at the iTunes Store?

Steve Jobs’s recent “Thoughts on Music” posting in favour of DRM-free music from the Big Four raises the question (at least among some observers) of why then cannot Indie music currently be DRM-free? Why is it all or nothing?

The answer is pure Apple through and through. The tyranny of choice. Think about the consequence of iTunes Music Store offering some music in FairPlay, some in unprotected MP3 format. Now every song needs to be clearly marked as which format it will be purchased in! No longer can I just click the Buy button and know what I am getting.

I’ve seen others arguing along similar lines, that Apple would need all of the major record labels to agree to abandon DRM before Apple would sell non-DRM music at the iTunes Store, to keep the experience consistent. It’s true that one of the best things about iTunes compared to other download stores is that all of the music — every song from every label — is sold under the same terms. (Compare to Microsoft’s Zune Marketplace, where some of the songs are restricted such that they can’t even be squirted between Zunes.)

However, there’s a difference here. What Apple has done with the iTunes Store is establish a single set of rules for how you can use the songs you pay for. If they started allowing individual record labels to sell DRM-free music, they could still sell everything under the same terms: that you’re allowed to play downloads on up to five computers. It’s just that with the DRM-free music, there’d be nothing in place to enforce the policy.

Imperfect, but it’s certainly not as confusing as multiple sets of rules for DRM-protected music. I think it’s something Apple could at least consider.

But how would this be communicated? A special “flag” icon to indicate format — that would not likely be noticed. A dialog box on purchase — people do not read them, and already ignore the current ones. The net result would be confused consumers wondering why some music they purchase works with their Zen and other purchased music will not play. Lots of angry customers. The result: a degrading of the iTunes Music Store experience and customer loyalty.

Good point. There are a lot of people clamoring for Apple to allow the indie labels that already want to sell DRM-free music to do so, starting now. I haven’t seen anyone propose how to do this while maintaining Apple-style consistency and simplicity.

I think it’s doable, though. As for format, I see no reason why Apple would need to sell music in any format other than AAC. Some protected by FairPlay, some unprotected. That AAC isn’t compatible with many third-party players isn’t Apple’s problem.

That leaves the issue of badging the tracks that are protected by FairPlay. Guess what? Some songs at the iTunes Store are already badged — with insipid “Explicit” badges: 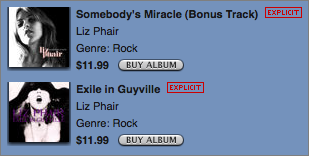 I see no reason why Apple couldn’t devise a little icon to represent FairPlay-protected songs. But Peter Lewis is right that no matter what Apple does, it would only matter for iTunes users who are paying attention — and most users don’t pay attention.

Even with a single consistent set of rules, DRM is complicated. (How many people have forgotten to deauthorize an old or broken computer before getting rid of it?) Selling a mix of DRM-laden and DRM-free music wouldn’t pose any serious technical hurdles for Apple, but it would pose some design challenges.

But now that Apple has published Steve Jobs’s “Thoughts on Music” essay, if one of the major music companies were to step up and say, OK Apple, go ahead and sell our songs without DRM, I think it’d be hard, if not downright impossible, PR-wise, for Apple to say they won’t allow it until the other companies agree, too.