There’s an obvious trade-off between battery size/weight and battery life. I would actually pay more for an iPhone that was thicker and heavier but provided longer battery life. I don’t think Apple should offer such a device (insofar as there are obvious benefits to maintaining the simplicity of the product line by offering only one form factor), just that if they were to offer such a device, I’d have bought it.

Most days, when I go to bed my iPhone still has plenty of gas in the tank. The problem strikes on the days when I go commando — foregoing my MacBook Pro and using my iPhone as my sole connection to the Internet for the day. I no longer lug my laptop with me when attending a conference, for example.

I’ve found that the only way to make it through an entire day like this is to find a way to recharge the iPhone at some point. However, the days when I’m going commando are, by definition, the days when I’m least likely to be anchored near an AC outlet for extended periods.

Several peripheral makers now make external battery packs that fill this need. The basic idea is that the battery pack holds an extended charge, and when you need it, you plug it into your iPhone (or iPod) via the dock connector port.

Back in August I bought the $50 Richard Solo Backup Battery. I ordered it directly from their web site. It’s fairly small and holds a decent-sized charge. 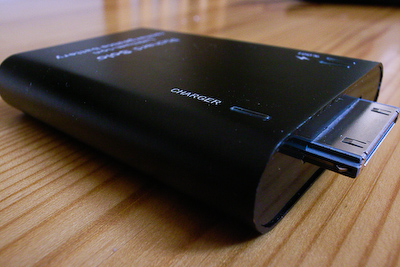 You can see that it’s sort of a dongle that, when connected to the iPhone, hangs off the bottom. 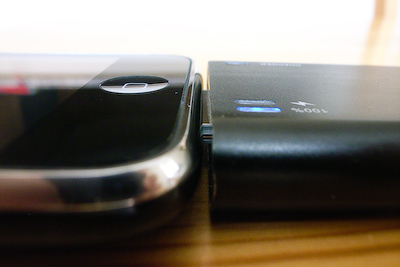 The other competing design concept for iPhone battery packs is to make them in the form of an iPhone case — something the iPhone sits inside rather than something that hangs off the bottom. Mophie’s Juice Pack seems to be the leading example of this. I chose the Richard Solo dongle for two reasons: it’s far easier to keep in a pocket when not in use, and (b) it was half the price ($50 vs. $100). A third advantage is that the battery dongles should work with any iPhone or iPod — the integrated battery/cases only work with single specific iPhone models.

In practice, the Richard Solo Backup Battery seems to hold enough juice to add about 50-60 percent of a charge to an iPhone 3G. I.e. after running down the iPhone’s internal battery to the point where I got the “10 percent” warning from the OS, plugging in the Richard Solo Backup Battery and letting it charge the iPhone will restore it to somewhere around 70 percent capacity. It seems to take about an hour for a complete discharge.

You can also use it to slurp occasionally — plug it in for 15 minutes here and there throughout the day. And you can use the iPhone while the battery pack is plugged in — from the iPhone’s perspective, it’s just another power source connected to the dock port.

Is it an amazing amount of external battery power? No. But it certainly feels like $50 worth, and the power capacity seems commensurate with the physical size. And in my experience, it provides just enough extra power to make it through a heavy day of iPhone use.

My biggest complaint is that it ships with a junky plastic cap to cover the dock connector. 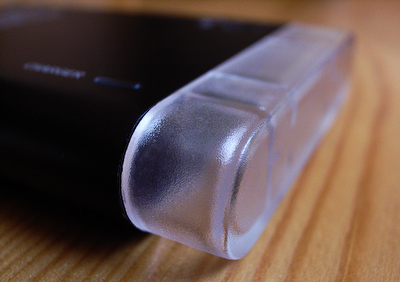 It didn’t snap on very tightly even when brand new, and within a week or two, it started falling off while in my pocket. Earlier this month while on vacation, I lost it. You don’t need the cap, but it somehow seems wrong to have the naked dock connector bouncing around in my pocket. A better design would be for the dock connector to be retractable, sort of like the blade on a box cutter.

Minor niggles include the supplied USB cable being too short, it being a little hard to tell at a glance which side of the battery is up, and a somewhat confusing array of LED lights that indicate when the battery is charging and when it is giving a charge.

The bottom line, though, is that it’s the next best thing to having an iPhone with a longer-lasting internal battery.