Exhibit A in the case against Walter Isaacson’s flawed Jobs biography: Malcolm Gladwell in last week’s New Yorker, arguing that Jobs was “a tweaker”:

In 1779, Samuel Crompton, a retiring genius from Lancashire, invented the spinning mule, which made possible the mechanization of cotton manufacture. Yet England’s real advantage was that it had Henry Stones, of Horwich, who added metal rollers to the mule; and James Hargreaves, of Tottington, who figured out how to smooth the acceleration and deceleration of the spinning wheel; and William Kelly, of Glasgow, who worked out how to add water power to the draw stroke; and John Kennedy, of Manchester, who adapted the wheel to turn out fine counts; and, finally, Richard Roberts, also of Manchester, a master of precision machine tooling — and the tweaker’s tweaker. He created the “automatic” spinning mule: an exacting, high-speed, reliable rethinking of Crompton’s original creation. Such men, the economists argue, provided the “micro inventions necessary to make macro inventions highly productive and remunerative.”

Was Steve Jobs a Samuel Crompton or was he a Richard Roberts?

Jobs was neither. These men make for a poor comparison to Jobs because Jobs didn’t really “invent” anything — not in the sense that Industrial Revolution inventors did. Jobs understood technology but was not an engineer. He had profoundly exquisite taste but was not a designer. What it was that Jobs actually did is much of the mystery of his life and his work, and Isaacson, frustratingly, had seemingly little interest in that, or any recognition that there even was any sort of mystery as to just what Jobs’s gifts really were. Gladwell, alas, takes Isaacson’s portrait of Jobs at face value:

In the eulogies that followed Jobs’s death, last month, he was repeatedly referred to as a large-scale visionary and inventor. But Isaacson’s biography suggests that he was much more of a tweaker. He borrowed the characteristic features of the Macintosh — the mouse and the icons on the screen — from the engineers at Xerox PARC, after his famous visit there, in 1979. The first portable digital music players came out in 1996. Apple introduced the iPod, in 2001, because Jobs looked at the existing music players on the market and concluded that they “truly sucked.” Smart phones started coming out in the nineteen-nineties. Jobs introduced the iPhone in 2007, more than a decade later, because, Isaacson writes, “he had noticed something odd about the cell phones on the market: They all stank, just like portable music players used to.”

If this is the standard for innovation, then what product, from any company, has truly been innovative? Some people — most people? — can’t get their heads around the idea that “innovation” doesn’t mean “creating something 100 percent new using never before seen technology, ideas, and concepts”. Yes, there were digital music players before the iPod. There were “smartphones” before the iPhone. But, I say, the differences between those products and Apple’s iPod and iPhone weren’t “tweaks”.

Here’s an image from the January 2007 Macworld Expo keynote, where Jobs unveiled the original iPhone. 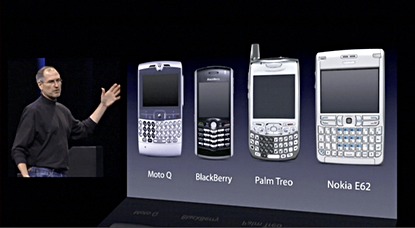 Those really were the leading smartphones of the day. Four years later and no company is making phones that look like those, save for RIM, and RIM is circling the toilet.

Here’s a video showing the Xerox Star in 1982, which Jobs and Apple, Gladwell would have you believe, “tweaked” to create the Macintosh. You can judge for yourself how much the interface resembles that of a Macintosh. Xerox certainly blazed the trail for many fundamental concepts the Mac built upon, but anyone familiar with the Mac would be utterly lost trying to use the Star without significant instruction. But the key difference between the Star and the Macintosh wasn’t design, but democratization. According to Wikipedia, a typical Star installation circa 1981 cost about $75,000 — it required a network and dedicated file server — and each additional workstation had a starting price of $16,000. The 1984 Macintosh cost $2,495 (and Jobs wanted it cheaper).

Bringing the concepts of a $100,000 networked workstation to a $2500 standalone mass market personal computer is, I say, radically innovative. The Macintosh was no “tweak”. Pixar was no “tweak”. The iPod is maybe the closest thing among Jobs’s career highlights that one could call a “tweak” of that which preceded it — but it’s hard to separate the iPod, the device, from the entire iTunes ecosystem in terms of measuring its effect on our culture and the way everyone today listens to music. Does anyone really think Apple’s entry into the music industry was a “tweak”? A “large-scale visionary” is precisely what Steve Jobs was.

The idea for the iPad came from an engineer at Microsoft, who was married to a friend of the Jobs family, and who invited Jobs to his fiftieth-birthday party. As Jobs tells Isaacson:

This guy badgered me about how Microsoft was going to completely change the world with this tablet PC software and eliminate all notebook computers, and Apple ought to license his Microsoft software. But he was doing the device all wrong. It had a stylus. As soon as you have a stylus, you’re dead. This dinner was like the tenth time he talked to me about it, and I was so sick of it that I came home and said, “Fuck this, let’s show him what a tablet can really be.”

How is that “the idea for the iPad”? The motivation to make the iPad, perhaps. The extra nudge to pluck the idea of “a tablet” from the idea pile and move it to the let’s get to work on it pile, more likely. But how can anyone read the above paragraph and come away with “The idea for the iPad came from an engineer at Microsoft”? (And even with regard to motivation, if you really think the iPad would not exist if not for that one blowhard tablet PC engineer from Microsoft, you’re nuts.)

What if some seemingly obvious bit of conventional wisdom is not only completely wrong, but, in fact, it turns out that the opposite is true? That’s the Malcolm Gladwell formula. It does not fit here.

I don’t even think it’s fair to call Gates merely a “tweaker”, though. Gates was (and remains) a large-scale visionary in his own right. He was simply never a product visionary. But the whole idea that software in general could be more valuable than hardware — or even just valuable, period? Gates. The man pioneered the concept of selling software. The idea that a software platform could be created that ran everywhere, on almost all hardware? Gates. And he built a company worth hundreds of billions of dollars from those ideas. So please don’t get me wrong and think I’m trying to belittle or diminish Bill Gates’s accomplishments. Gladwell’s entire premise here is fundamentally flawed; I’m just saying that given that faulty premise, Steve Jobs isn’t the one who fits the description.

Part of what makes Gladwell’s premise so wrong is that Jobs, clearly, was a tweaker too. Iteration — steady incremental improvements, prototype after prototype, design after design, year after year, release after release — that process is ingrained in Apple’s (and I think Pixar’s) culture. But Gladwell writes:

The visionary starts with a clean sheet of paper, and re-imagines the world. The tweaker inherits things as they are, and has to push and pull them toward some more nearly perfect solution.

Steve Jobs really did re-imagine the world. The thing is, he actually made it happen, too.