Apple and the Terrible, Horrible, No Good, Very Bad Drop in iPhone Sales

Some much needed perspective on Apple’s first year-over-year quarterly sales drop since 2003, from Daisuke Wakabayashi for the WSJ:

Apple’s revenue and profit for the fiscal second quarter ended March 26 both missed analysts’ expectations. The company also projected that revenue in the current quarter would fall far short of expectations.

Worth noting that Apple’s actual results were very nearly in line with the company’s own guidance for the quarter, given three months ago. (Revenue was within guidance, but gross margins were slightly low.) A year-over-year decline is never good news, and is a possible harbinger of a sustained decline, but these numbers, along with Apple’s guidance for the June quarter, should not have been a surprise to anyone paying attention. Certainly not enough to justify today’s 6.25 percent drop in the company’s stock price, which knocked about $40 billion off the company’s market cap. That’s more than the value of Netflix. Welcome to the casino.

But for all of the concerns about Apple’s growth, the company still generated profits in the March quarter that are expected to exceed the combined earnings of technology peers Alphabet Inc., Facebook Inc., and Amazon.com Inc.

Amazon isn’t expected to announce results until Thursday, and they famously strategically forgo profit for the sake of revenue growth. So let’s take them out and replace them with a company with a history of enormous profits, Microsoft. It’s still true: with $10.5 billion in profit, Apple earned more in the quarter than Alphabet ($4.2B), Facebook ($1.5B), and Microsoft ($3.8B) combined. That’s what happens after an almost unfathomable streak of over 50 consecutive quarters of year-over-year growth — you reach an altitude at which even an indisputably very bad quarter still leaves you with enormous, industry-leading profits.1

Surprising? Shouldn’t have been.

Alarming? Not even close.

What explains the hysterical response — both from investors, and from the business and tech news media? I long ago gave up trying to understand it. But I am reminded of the Stanford Marshmallow Experiment. Wikipedia:

The Stanford marshmallow experiment was a series of studies on delayed gratification in the late 1960s and early 1970s led by psychologist Walter Mischel, then a professor at Stanford University. In these studies, a child was offered a choice between one small reward provided immediately or two small rewards (i.e., a larger later reward) if they waited for a short period, approximately 15 minutes, during which the tester left the room and then returned. (The reward was sometimes a marshmallow, but often a cookie or a pretzel.) In follow-up studies, the researchers found that children who were able to wait longer for the preferred rewards tended to have better life outcomes, as measured by SAT scores, educational attainment, body mass index (BMI), and other life measures.

I think an awful lot of investors and members of the news media are like those kids who couldn’t wait: no ability whatsoever to look past the next few months.

But look at how things were going before the iPhone 6. Had the trend of 2012–2014 continued through 2015, iPhone sales last quarter would have been 65–70 million. Instead they were just under 75 million. It’s only in comparison to the huge holiday quarter of 2014 that last quarter looks dull.

I’m reminded of the devotion climate change deniers had to the year 1998. Because of an intense El Niño that year, global temperatures rose well above the trend line, and it remained the hottest year on record for several years. Deniers hit upon this fact, and claimed that global warming had stopped, even though the overall warming trend had continued. The iPhone 6 was Apple’s El Niño.

If sales don’t improve with the iPhone 7, I’ll be willing to believe we’ve reached “peak iPhone.” Until then, the only problem I see is that the iPhone 6 was too successful.

I think Dr. Drang nails it. We might be seeing “peak iPhone”. But it could just be a statistical blip, caused in large part by the iPhone 6’s exceptional popularity, along with other factors like the economy in China and currency exchange rates. There’s simply not enough data to know. (It’s worth focusing on the iPhone here, because it accounts for two-thirds of Apple’s revenue. For the next few years, at least, as the iPhone goes so goes Apple.)

The iPhone has always been a seasonal product, but the seasonality changed with the iPhone 4S, which debuted in October 2011. The first four iPhones debuted in June/July, and the Verizon/CDMA iPhone 4 debuted in January 2011. Let’s call the 4S the beginning of the modern iPhone seasonality era — those released in September or very early October, with support for more carriers. October through December is “Q1” in Apple’s financial calendar, and in this modern era, that’s the biggest selling quarter. First, because it’s the quarter in which the new phone arrives, and tens of millions of people want to buy them immediately. There is no product in the world that generates “opening weekend” sales like the iPhone. I can’t even think of another product where people talk about opening weekend sales, other than other Apple products and major Hollywood feature films. The second factor is that it’s the holiday quarter.

Q2 — January through March — has always shown a decline from Q1. Here are the numbers for Q2 iPhone unit sales in the modern era (and 2011 thrown in for comparison):

The same numbers (minus the pre-modern-era 2011) in a chart: 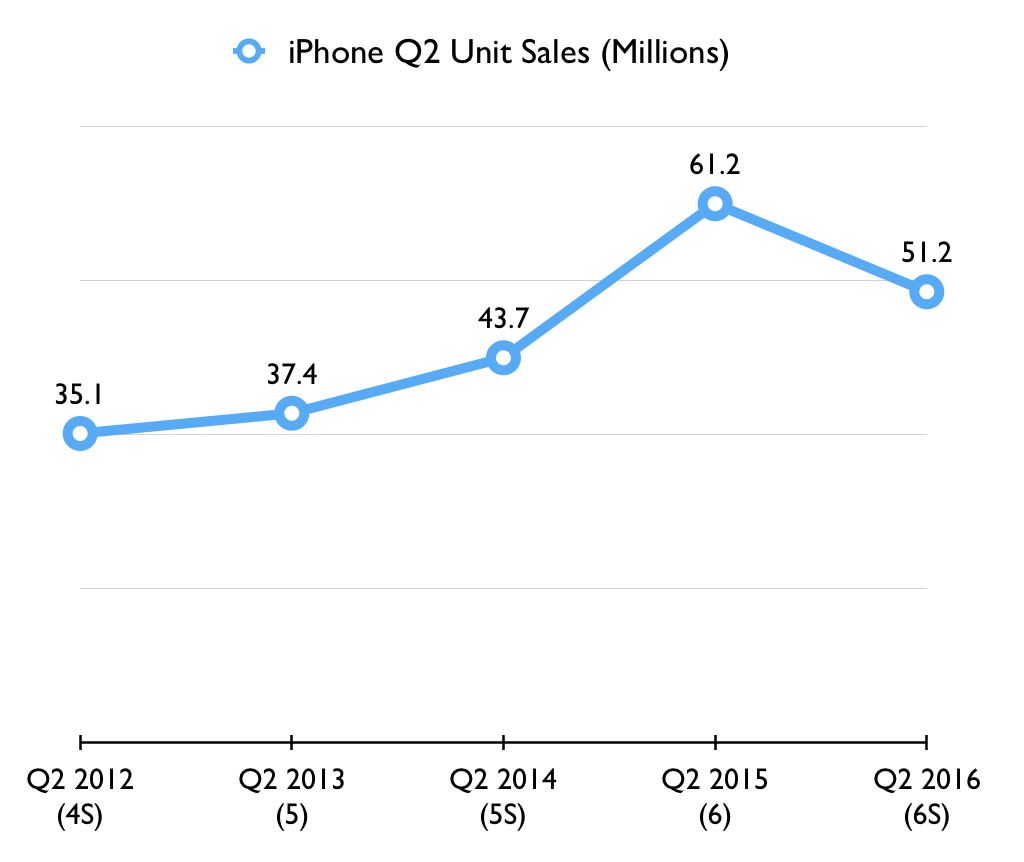 In chart form, you can see what an anomaly last year was with the iPhone 6. But given that you can almost draw a straight line connecting the other four points in the chart, I’m not willing to call it a peak yet. But even if we see a return to growth, it might take several years before we see another Q2 with over 60 million units sold.