How We Shot The Talk Show Remote From WWDC 2020

If you missed it, here’s a re-link to last week’s special episode of The Talk Show, with special guests Craig Federighi and Greg “Joz” Joswiak.

By necessity, it was shot remotely — Federighi and Joz were at Apple Park, and I was at home in Philadelphia. Overall I think it turned out pretty well, and whatever is wrong with it is the result of my middling skills as an interviewer. Technically, I think it came out amazingly well — it looks great and sounds great. It doesn’t look or sound like a Zoom or FaceTime call that was simply recorded and played back.

A lot of folks noticed that, and have asked how we made it. I have good news and bad news. The good news is the answer is very simple and doesn’t require any expensive equipment. The bad news is it’s a lot of work.

For the actual video call, we used Webex. That’s Cisco’s platform that’s like Zoom. Webex is pretty good in terms of call quality, very good in terms of privacy and security, and pretty crappy in terms of user experience and user interface. Zoom is kicking their ass as the go-to app for remote meetings because Zoom makes easy what Webex makes confusing. But it doesn’t really matter what we used for the call. It could have been using FaceTime or Skype or Zoom and it wouldn’t have made a difference to what you see on the final video, because we didn’t record anything from the Webex call. (Well, we did record it, just in case, but we didn’t want to use that footage, and because Murphy’s Law thankfully did not strike, we didn’t need to.) The call was just for us three — me, Federighi, and Joz — to hear and see each other live.

But all that stuff was just for the conference call. We didn’t use any of that footage for the show.

For the show’s audio, we used real podcast/TV-quality microphones — desktop mics for Federighi and Joz; and a professional lav mic and boom mic for me, connected to a Sound Devices MixPre-6 digital audio recorder (all borrowed from local audio pro and Sandwich collaborator Zach Phillips). We didn’t need both microphones, but using two gave us more choices in post. I could have recorded my side with the microphone and USB preamp I usually use for my podcast, but it didn’t really work visually with the space where we set up to film in my office. The point is all you really need is any microphone good enough to record a podcast.

For video, we shot 4K 30 FPS using iPhone 11 Pros. That’s right, iPhones. Apple seems to have plenty of them so Federighi and Joz each had two — one positioned head-on, and one to the side for a wider-angle view. I just used one. The trick to getting that “looking right at the camera” angle is to position the iPhone camera just behind and above the device being used for the conference call. We weren’t using the iPhones as webcams for the call, but we positioned the main ones as though we were. That’s key to the setup.

I had mine mounted on a GorillaPod and Glif. From behind the camera it looked like this: 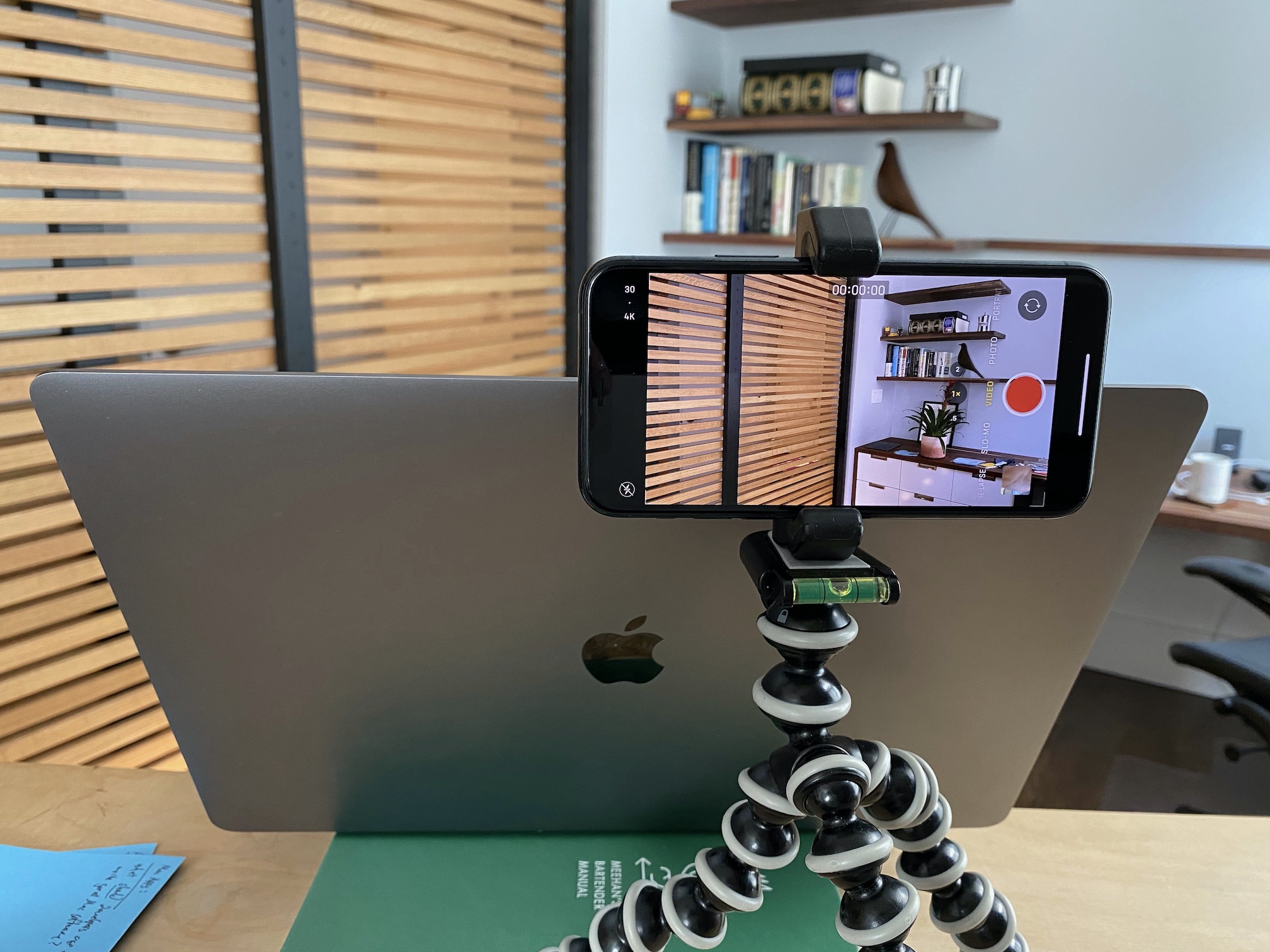 So we wound up with three audio recordings (one of each of us) and five video recordings (one for me, two each for Federighi and Joz). We also had an “if all else fails” recording of the Webex call. I’m lucky to have nice natural light in my office (we shot at 10am PT / 1pm ET), and we set up a few additional low-cost LED lights, that, to be honest, I don’t think accomplished much.1 After that, it was just a matter of editing.

Which, of course, is a huge matter. So, a few weeks before the show, I called upon my friends at Sandwich, and they were keen to help. They know me, they know The Talk Show, and they know how to make good videos. They nailed it. They were so easy to work with and the end result is exactly how I imagined the show turning out. Really, the biggest problem was just getting them my footage. I get somewhere between 250-300 Mbps downstream, but my upstream connection maxes out around 10 Mbps. With 17 GB of footage, that wound up taking around 7-8 hours. (Because they used four cameras, Apple’s footage was close to 100 GB in total — they, however, apparently have faster upstream internet service than I do.)

None of this is magic or particularly expensive. Calling in Sandwich for post-production and editing was, let’s face it, a cheat code, but the raw video footage from the iPhones was really good. Recent iPhones are amazingly good video cameras.

Basically, the secret to shooting a remote interview that doesn’t look like a recorded internet call is simply not to use the internet call video. Instead, shoot each participant like you would if there were no internet call involved, recording video and audio locally for everyone, using decent cameras and microphones. In audio podcasting we call this technique “double-ending” — recording the audio locally for each participant. We used the same principle for my show, just with both video and audio.