Safari 2.0 is only available if you’re using Mac OS X 10.4 or later; Safari 1.3 offers a very similar rendering engine, but is only available on Mac OS X 10.3.9. Like most browsers, Safari provides its version number in the user-agent string it provides when identifying itself to your web server — which means that by examining your server logs, you can tell which version of Mac OS X Safari is running on.

So, by looking at the daily logs for daringfireball.net over the last few weeks, we can see how many Safari-using readers were using Mac OS X 10.4, 10.3.9, and older versions of the OS.

That said, here we go. The numbers in the last four columns are the percentage of Safari users using that version of Mac OS X.

In November 2003, I did this same analysis a few weeks after Mac OS X 10.3 shipped. Here’s a graph of both adoption periods, starting with the day before each OS was released in stores: 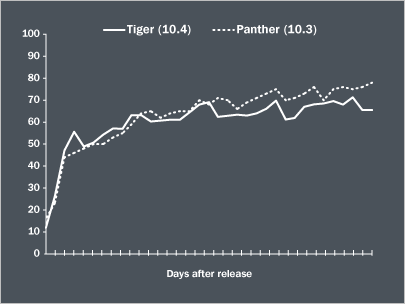 The adoption rate for Tiger seems to be slightly less than that of Panther, but, considering the sloppy accuracy of server log analysis, I’m scoring it as a tie, for now.