Sure, I predicted Apple wouldn’t yet announce Intel Macs at MWSF, but I wasn’t surprised that they did. My main reason for thinking they wouldn’t do so yet is that they’d catch too many third-party developers while they were still putting their universal-binary pants on. But Apple never promised any particular ship date, other than “before” this year’s WWDC, and the modern era Apple doesn’t exactly bend over backwards to please third-party developers.

So but what did surprise me is that both of the new Intel-based machines are using the existing enclosure designs.1 I can’t recall a single previous instance when Apple switched to a new processor family without introducing new case designs, and the switch to Intel processors is as big a switch as they’ve ever made, certainly a bigger deal than, say, the switch from G3s to G4s, or G4s to G5s — all of which transitions coincided with the introduction of new case designs.

It hadn’t even crossed my mind that they might do this, introduce Intel-based Macs identical in outer appearance to existing PowerPC Macs. I suspect many others had a similar blind spot: one reason no one predicted Intel-based iMacs for MWSF is that the iMac G5 got a refreshed case design just a few months prior. If you assumed, as I did, that Apple’s first Intel-based iMacs would ship with a new case design, you had to figure they’d be coming later in 2006, so as to give the still-new iMac G5 case a reasonable lifespan.

But in hindsight, I think I see Apple’s strategy. Internally, these new computers are almost completely different than their PowerPC brethren; but by using the same outer appearance, it reinforces the message that this transition is intended to be smooth. A shift, not a schism.

This is further reinforced by the fact that neither Intel-based Mac replaces any PowerPC models; both the iMac G5 and 15-inch PowerBook G4 are still for sale. This positions the Intel-based models more like siblings than successors.

If you have any sort of technical background in software, you probably understand that this transition is quite significant. But Apple’s message to consumers is, “It’s just a Mac with a faster processor.” Point being that the technical problems are for Apple and Mac developers to worry about, not Mac users.

Nevertheless, I expect to see next-generation cases for at least some of the Intel-based Macs to be released in the first half of this year.

A few other observations regarding the new hardware:

Many people seem to be surprised by the prices, apparently under the misguided assumption that Intel = cheap. E.g.: Robert Scoble’s son Patrick, who expected Intel-based Mac laptops to sell for $700. (Maybe Apple will release a $700 laptop — it’s not that far off from the iBook G4’s current $999 starting price — but if they do, it’s certainly not going to be an ass-kicker like the MacBook Pro.)

PCs typically cost less than Macs because they’re pieces of crap, not because Intel CPUs are less expensive than IBM’s or Freescale’s.

And don’t get me started on bullshit like this article, wherein BusinessWeek writer Arik Hesseldahl attempts to stir up some shit by casting Apple as a profiteer. The article is headlined “Is the New iMac a Cash Machine?”, with the sub-head: “Disassembling the first fruit of the Apple-Intel alliance raises some interesting questions about the model’s profit margins”. Hesseldahl’s article hinges on an analysis by a firm named iSuppli, who took apart a $1299 iMac Core Duo and claim, judging from its components, that it costs Apple $898 to assemble.

I’m not saying their cost analysis is wrong. I’m saying that even if it is exactly right (but are they sure it isn’t $899?), there’s nothing scandalous about it. For one thing, Apple releases its gross margins in its quarterly financial reports. For the just-ended Q1 2006, Apple reported margins of 27 percent. Selling $1299 computers that cost them only $898 to produce would imply margins of around 31 percent. Shocking.

But worse, iSuppli’s cost analysis explicity excludes all software and packaging. By this logic, all of the software bundled on these machines, including the operating system, must have written itself. Worse still, at the end of the article, Hesseldahl gets around to mentioning that Apple almost certainly pays IBM far less for PowerPC processors than they pay Intel for Core Duos, clearly indicating that the $1299 iMac Core Duo is probably less profitable for Apple than the $1299 iMac G5.

The headline and opening paragraphs of the article are clearly construed to leave casual readers — and those with poor reading comprehension skills — with the conclusion that Apple is profiting wildly from the switch to Intel processors, when the facts and analyst opinions in the article itself lead to the completely opposite conclusion.

In addition to the usual round of bug fixes, Mac OS X 10.4.4 contains some noticeable new software: a slew of new and rewritten Dashboard Widgets.

It could just be coincidence, but there’s a bit more visual consistency with these latest widget revisions. The Address Book, Google, and People widgets all use very similar color schemes, and the Business widget is the same but yellow, which makes perfect sense given its role as a yellow pages front-end.

More disheartening is that fact that the new widgets based on web services are utterly U.S.-centric: People and Business only query U.S. phone book listings, and the new Ski Report widget only has data for U.S. ski resorts. I am fairly certain that at least some people outside the U.S. have telephones, and that some of them may ski as well. [Update: I stand corrected, the Ski Report widget does list Canadian resorts along with at least some in Europe. Point still stands though that Apple’s widgets in general are U.S.-centric.]

The big news in iLife ’06 — unless you consider the abolition of brushed metal windows big news — is iWeb, a new app in the suite. In a nut, iWeb is more or less Pages for the web — it’s not an app for designing your own web pages, but rather an app for publishing your own web pages using templates designed by Apple. It’s particularly focused on generating pages populated with content from the other iLife apps. It’s a great idea, very easy to use if you’re publishing to your .Mac account, and I predict it’s going to prove quite popular.

iWeb can be used to post to non .Mac servers, but not directly. What you can do is export to a folder locally on your Mac, then upload that folder to a server using a standalone SFTP client. Or, if your web host supports WebDAV (like, say, TextDrive does2), you can mount your hosted space directly from the Finder as a network volume and save to it directly from iWeb.

Some of the features depend on .Mac, however. For example, the slideshow feature for sets of photos uses an entirely different implementation when you publish to a folder, because the fancier .Mac version relies on Ajax, which in turn relies on server software that only runs on .Mac. This isn’t a complaint — it wouldn’t be possible for Apple to create an Ajax-powered slideshow that could run on any arbitrary server.

[Update: Abe Fettig has the scoop on exactly what’s going on with the .Mac-hosted slideshows; it’s not Ajax, but rather some custom server software that generates the glass floor reflections and high-quality thumbnails on-the-fly.]

Compare the slideshows on the following pages to see the difference:

For comparison’s sake, here’s the same photo set posted to my Flickr account. I think Apple’s slideshow compares well against Flickr’s. The only thing I dislike about Apple’s is the reflective glass floor mirror effect; it’s certainly cool, but I think it’s unnecessarily distracting for the display of photographs. But Apple’s slideshow pictures are bigger, and I like their controls better.

As a blogging tool, especially when combined with .Mac publishing, iWeb is incredibly easy to use. It compares terribly against most major weblog packages in terms of features3 — because iWeb is a desktop app that pushes your weblog to the server as a set of static files, there aren’t any interactive features like comments.4

Where it wins is in ease-of-authoring. You just write, and to add photos or movies or audio clips, you just drag them into your blog editing window. And it just works. Apple has completely ignored the features race in order to concentrate on simplicity and obviousness. People who have no idea how to publish anything on the web are going to be able to use iWeb to publish all sort of stuff to the web.

Regarding the XHTML markup iWeb generates, there’s good news and bad news. The good news is that it validates (as XHTML 1.0 Transitional) and uses CSS for layout (as opposed to tables). The bad news is that it pretty much utterly ignores tag semantics, and the CSS is sprinkled around inline in the markup. E.g., instead of wrapping paragraphs with <p> tags, perhaps with a class attribute, iWeb wraps them with:

This is disappointing, but not outrageous. Scott Stevenson likes the photo gallery feature and his first impression was that iWeb’s markup was pretty good. Stevenson is a very smart guy, but he’s not a professional web developer, and I suspect his perspective on iWeb’s markup is similar to that of the engineers on the iWeb team.

[Update: Ends up Scott Stevenson is a professional web developer.]

I have a feeling the iWeb engineers were expecting praise for the fact that the markup iWeb produces validates; instead, most of the reaction from the web-development community has been focused on the semantics, and the descriptions are using harsh words like “awful” and “atrocious”.

The reasons why iWeb would do well to generate more semantic markup are multitudinous, but I won’t waste time covering them here. My suggestion to the iWeb team: buy yourselves a copy of Jeffrey Zeldman’s Designing With Web Standards, or, better yet, get Apple to cough up the dough to fly Mr. Zeldman out for a few hours of consultation.

My point being that iWeb’s XHTML generator is not atrocious; it is trying to do the right thing but has fallen short. It should be improved, not scrapped.

Lastly, I’m compelled to rave about the “Intel chip” commercial Apple unveiled at the show. 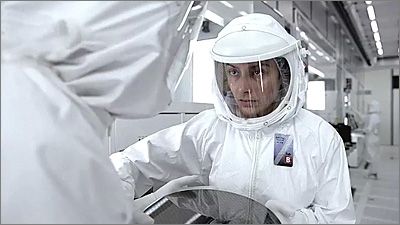 The lighting, the extreme slow-motion cinematography, the music, the words — the ad is beautiful. It has a Kubrickian vibe that warms my heart. This is TV-commercial-as-art.

Intel, however, is feigning displeasure at the ad’s message:

“The Intel chip. For years, it’s been trapped inside PCs. Dull little boxes, dutifully performing dull little tasks. When it could have been doing so much more.”

Regarding Intel’s reaction to the ad, CNet’s Ina Fried reported:

“Never would we characterize our customers that way,” Intel Vice President Deborah Conrad said in an interview.

Conrad said that Intel cooperated with Apple for some particulars of the TV spot, but added, “We didn’t know what the end result was going to be.”

The company did get a peek at the ad before Tuesday’s keynote, but it wasn’t too much earlier.

“It’s probably a good thing that we didn’t see them earlier,” Conrad said.

Don’t believe it. Intel loves this ad. This ad makes Intel processors look better than any ad Intel has ever produced itself. The feeling this ad conveys is that Intel’s chips are going to be kicking some goddamn major ass inside Macs.