It’s been about three weeks since my “Initiative” announcement that I’ve gone full-time with Daring Fireball. So far so good. The response has been terrific, both in terms of membership signups and t-shirt sales, and in terms of the absolutely staggering amount of email I’ve gotten from readers wishing me good luck. (Still catching up on that email, just from April 20 alone, in fact. Almost there, though.)

I’ve added a small graph to the header of the site’s web pages to track the growth in membership since my announcement. The graph is small and mostly unlabeled, so in and of itself it’s probably rather cryptic, and if someone showed it to Edward Tufte he’d probably start crying.

Here’s an explanation that, I hope, should help you make sense of it:

This goal is a somewhat arbitrary number that represents about one-third of the total revenue I believe I need to make from Daring Fireball to “make it” for the year. My basic plan is to make about one-third of my income from membership and t-shirt sales, another third from advertising, and the remainder from other initiatives in the next few weeks and months.

As of this writing, it has leveled off at about the 80 percent mark, which is already pretty good. If we don’t quite make it to the goal, that’s OK. But if you’ve been thinking about supporting my efforts, but have sort of wondered whether I’d already made so much money that I spent my weekend yacht shopping, the truth is that I could still use your help.

(I’m not going to sing you a sob story about how hard it is to succeed with a small business like this, but keep in mind that I need to foot the bill for significant expenses like health insurance for my entire family.)

The graph is regenerated every 30 minutes or so; stay tuned to see how it goes.

Just like in past membership drives, most of the revenue is coming from t-shirt sales. At SXSW this year, I spoke on a panel about making money from weblogs, and one of the main points I emphasized is that people are more willing to spend money for atoms than for bits. I.e. people will happily pay for things they can actually hold in their hands, but you can’t touch ones and zeroes.

Despite the fact that the reason you fine readers are buying these shirts is that you want to support my work, I don’t think I’d be nearly as successful if I were only asking for donations or selling memberships.

This isn’t criticism; it’s just an observation about human nature. It’s why so many honest people aren’t at all reluctant to download bootleg media files from file-sharing services. I see it in myself, too. When The New York Times put their op-ed columnists behind a for-pay subscription service on their web site earlier this year, I was very reluctant to pay the $50 annual subscription fee even though I read their op-ed columnists, on the web, almost every single day of the year.

There’s a big difference between The Times’s TimesSelect system and my membership system at Daring Fireball, which is that I’m keeping all of my article content freely available to the public, whereas the only way to read The Times op-ed columnists is to pay for a TimesSelect account. I’m just pointing out that $50 a year isn’t a lot of money for something I read at least 300 times per year — it works out to like 15 cents a day — but yet I was reluctant to sign-up because it just didn’t seem right to have to pay for something to read on the web.

Of course, it helps too that the shirts are pretty fun: 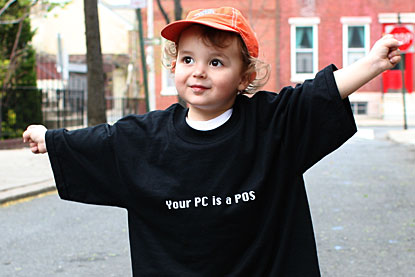