Anti-Aliasing on the iPhone

Back in July when I wrote about the fonts available in the iPhone OS, I speculated in a footnote that the iPhone was using sub-pixel anti-aliasing to render text.

Anyway, ends up I was wrong. The iPhone never uses anything other than standard anti-aliasing. I figured this out months ago, using Erica Sadun’s iPhone screenshot utility, but hadn’t written about it until now. Here’s a screenshot I took of MobileSafari rendering my font test page: 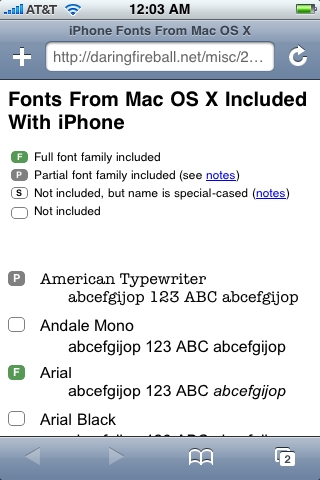 Open that image in Preview and zoom in, and you can clearly see it isn’t using sub-pixel anti-aliasing. Here it is at 300 percent magnification: 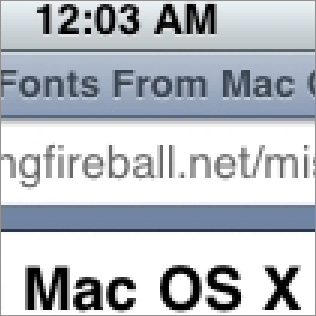 But it’s not that simple, even on Mac OS X. There are all sorts of spots where Mac OS X falls back on standard anti-aliasing, even on systems set to use sub-pixel rendering. Dashboard widgets, the new Leopard menu bar, and, apparently, just about all text rendered in Core Animation views.1 Sven-S. Porst has a nice report about this, and he concludes that sub-pixel anti-aliasing is, ultimately, a clever hack that will eventually fall by the wayside as display resolutions improve. I suspect he’s right.

What makes text look so good on the iPhone compared to a Mac is simply the density of the pixels on its screen. When you look at an iPhone screenshot rendered at full-size on a Mac, there’s nothing special about the text rendering. Current Cinema Displays offer roughly 100 pixels per inch, most MacBook screens are around 110-120, and the high-resolution 17-inch MacBook Pro offers 133. But the iPhone offers 160 ppi.

That’s apparently the point where standard anti-aliasing — simpler and easier to compute and render — is sufficient to produce good-looking on-screen type.