Because MobileMe doesn’t sync subscription calendars, I tried using Google Calendar to work around this. The idea was that I’d put these “I don’t want the alarm to appear on my iPhone” events in my Google Calendar account, then subscribe to that calendar in iCal using the ICS feed. It didn’t work, because the alarms for the events don’t appear in the ICS feeds that Google Calendar produces.

But it ends up that about a week ago, Google enabled CalDAV support for Google Calendar, and it works pretty well with iCal on Mac OS X Leopard. (CalDAV is an industry standard for client-server calendar sharing over WebDAV.) As per Google’s instructions, you connect iCal to Google Calendar using the Account panel in iCal’s preferences. Once you’ve done so, your primary calendar in your Google account appears in a new section in the iCal source list: 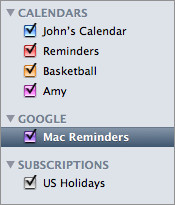 In the above screenshot, “Google” is the name I gave the account in iCal’s Accounts panel. “Mac Reminders” is the name of the primary calendar in my Google account.

This is actually quite odd, because Apple is a leading proponent of the CalDAV standard. iCal Server — the calendaring component in Mac OS X Server — is built around CalDAV. And since Apple itself uses Mac OS X Server (at least in the software engineering division), the company’s enterprise calendars use CalDAV, which means neither Apple’s own calendars nor those of Mac OS X Server customers can sync in both directions to the iPhone. Awkward.

So my guess is that this is simply a feature Apple hasn’t gotten to yet, and that full CalDAV support will eventually make it to the iPhone. But in the meantime, you can take advantage of the situation, if, like me, you wish to create calendars in iCal that don’t sync with MobileMe.1