The bottom-line conclusion in my iPhone XR review:

I’ve read over a dozen other reviews of the XR this week, and that’s been the bottom line of every single one of them. It’s a remarkable consensus. There are some interesting differences though.

Matthew Panzarino thinks the biggest compromise is the lack of a telephoto second camera:

However, I found myself missing the zoom lens a lot. This is absolutely a your mileage may vary scenario, but I take the vast majority of my pictures with the telephoto lens. Looking back at my year with the iPhone X I’d say north of 80% of my pictures were shot with the telephoto, even if they were close ups. I simply prefer the “52mm” equivalent with its nice compression and tight crop. It’s just a better way to shoot than a wide angle — as any photographer or camera company will tell you because that’s the standard (equivalent) lens that all cameras have shipped with for decades.

Wide angle lenses were always a kludge in smartphones and it’s only in recent years that we’ve started getting decent telephotos. If I had my choice, I’d default to the tele and have a button to zoom out to the wide angle, that would be much nicer.

But with the iPhone XR you’re stuck with the wide — and it’s a single lens at that, without the two different perspectives Apple normally uses to gather its depth data to apply the portrait effect.

Nilay Patel, on the other hand, doesn’t miss the telephoto second camera much but instead thinks the LCD display is the biggest compromise compared to the XS iPhones:

Those differences are interesting and worth pulling apart, but really, the simplest way to think about the iPhone XR is that it offers virtually the same experience as the iPhone XS for $250 less, but you’ll be looking at a slightly worse display.

So, how much do you care about the display on your phone?

Look. The display on the iPhone XR is… fine. It’s fine! It has a lower-resolution and pixel density than the OLEDs in new flagship phones like the iPhone XS, Galaxy S9, and Pixel 3, but it’s the same 326 pixels per inch as Apple’s previous non-Plus LCD iPhones. Anyone coming to this phone from any iPhone, save the iPhone X, will not notice a huge discrepancy in resolution. I suspect most people will find it totally acceptable.

That’s not to say it matches the quality of previous iPhone LCDs. The iPhone XR LCD definitely shifts a little pink and drops brightness quickly when you look at it off-axis, which often leads to a bit of a shimmery effect when you move the phone around. I noticed that shimmer right away, but I had to point it out to other people for them to see it. (It’s one of those things you might not notice at first, but you can’t un-see it.) Apple told me the XR display should match previous iPhone LCDs in terms of performance, but side by side with an iPhone 8 Plus, the off-axis shifts are definitely more pronounced.

Neither Panzarino nor Patel are wrong. It’s obvious that the display and lack of a second camera are the two biggest compromises on the XR that allow it to be priced so much lower than the XS models. Which one matters more to you is purely subjective. Panzarino says “If I had my choice, I’d default to the tele and have a button to zoom out to the wide angle”; Patel says “I rarely take zoom photos, so I didn’t miss the telephoto lens from the iPhone XS at all”.

Count me on Panzarino’s side, though. If I could have a next-gen iPhone XR that either (a) keeps the same LCD display but adds the XS’s second camera, or (b) switches to the XS’s OLED display (including smaller bezel) but still lacks the second camera, I would choose (a) in a heartbeat. After a day with the iPhone XR I stopped seeing anything wrong with the display or wider bezel. I miss the telephoto camera every day.

Another tidbit from Patel, regarding the amazing work Apple put into making the XR display as nice as they could:

Apple’s also done some extremely detailed work to make the rounded corners of the LCD perfectly match the corners of the phone itself, which is work I desperately wish other companies would do. (Most other phones with rounded corners have mismatched radii, and the Pixel 3 XL has different corner radii at the top and bottom, which, to me, looks far worse than any chunky bezel.)

It’s somewhat easier to round the corners of an OLED panel: each pixel is its own light source, so you can turn them off individually around the curve to smooth it out. You can’t do that with an LCD panel because there’s just one single backlight for the entire display, which will shine through the black pixels along the edge. So Apple built little apertures for the pixels around the corners of the XR display to mask some of the light coming through, on top of antialiasing the curve in software. It’s a neat example of Apple’s attention to detail.

The sub-head from Panzarino’s review made me laugh:

The iPhone XR is Apple’s best knockoff yet of its groundbreaking iPhone X.

I think it could have worked to write an entire iPhone XR review using the conceit that it’s an amazing knockoff of the iPhone X.

Less fine is the sudden loss of Z-axis asymmetry thanks to the shoved down Lightning port on iPhone XR. Again, yes, this is only something I.D. nerds like myself care about, but after iPhone XS broke X-axis symmetry to fit a 4x4 MiMo antenna on the bottom, iPhone XR has gone and broken the Z by top aligning instead of middle aligning Lightning to the screws and grills, probably to make room for the not-as-thin-as-self-illuminating-OLED edge-to-edge LCD.

I still haven’t gotten used to the steel screws and ports not always being vapor coated to match the aluminum anodization, now this?

I know it bugs the designers and engineers even more than it does me. And while it’s still not as rando as some other companies seem to be by tossing elements into the casing like drunken darts at a board, and as nit-picky (and I’m sure eye-rolling) as I’m sure it is for some of you, I’ve given Samsung shit about it for years, so I’m not going to stop just because, this time, my eyes are bleeding courtesy of Apple.

I hate to admit it, but I didn’t mention the Lightning port not being centered with the screws or speaker grills because I didn’t notice it until I read Rene’s review. (Nilay Patel mentions it too.) But now I can’t unsee it: 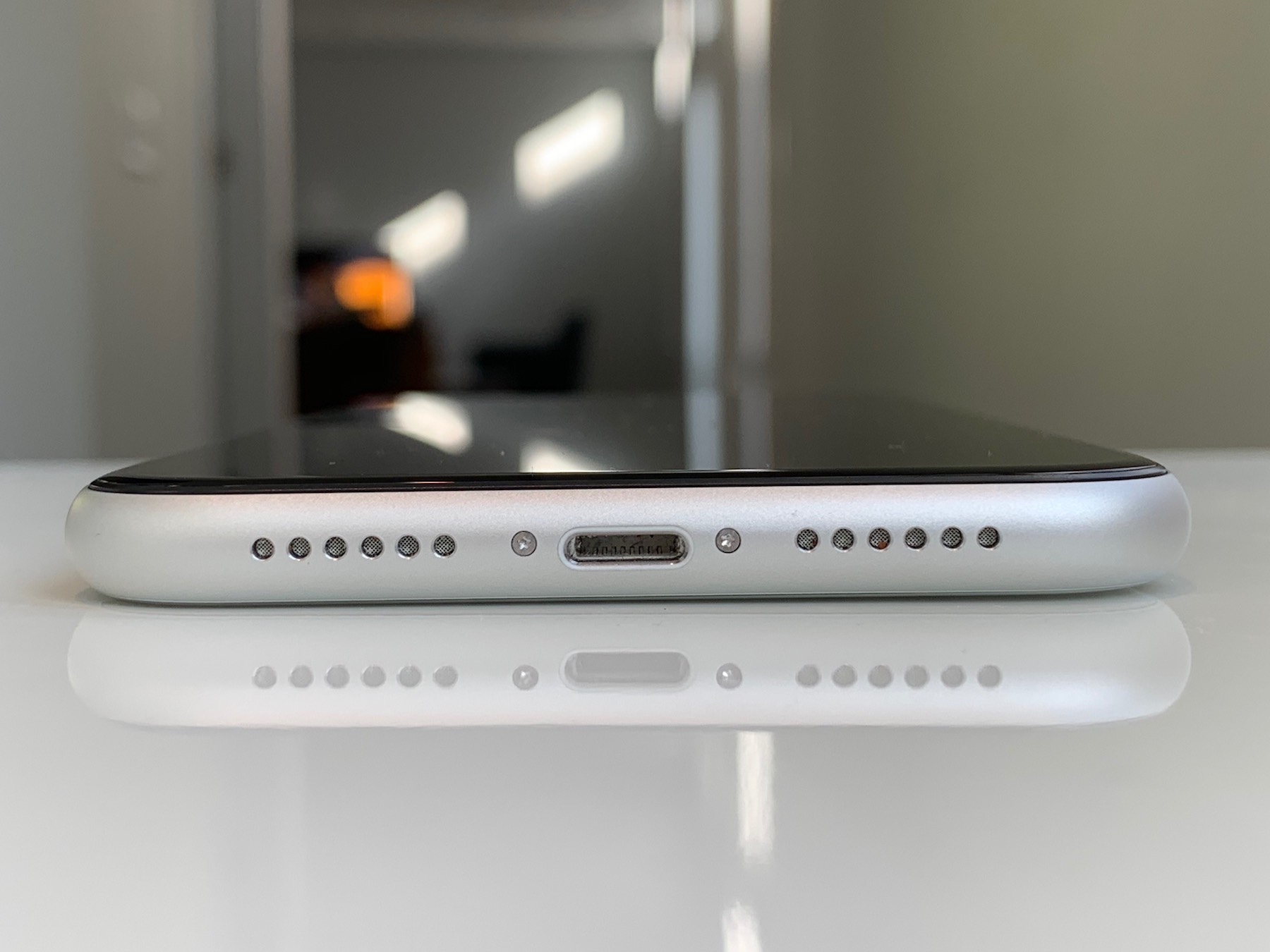 It’s not perfectly aligned but it is perfectly excusable. It’s simply really, really hard to make an LCD phone with no chin or forehead to mask the display controller. It’s hard to make an OLED phone with no chin or forehead — just ask Google. But LCD is a different ballgame. To my knowledge, iPhone XR is the only LCD phone ever made, by anyone, with no chin or forehead. With the display controller underneath the display, the Lightning port had to be pushed down. It is absolutely a compromise, but well worth it for the overall look of the device. Everyone would notice if the XR had a chin; almost no one is going to notice the Lightning port is top-aligned rather than centered with the screws and speakers.

Joanna Stern, as usual, has the best video. She got the Product Red variant, and her video really shows how great it looks. She also illustrates well the sort of scenarios where you’ll miss having a telephoto lens.

Lastly, a point on pricing and the notion that today’s phones are “just” phones. Here’s Lauren Goode at Wired:

Apple wants to make it clear that it’s not trying to gouge you. Sure, when the iPhone X launched last year, Apple priced it at nearly $1,000. And yes, this year’s iPhone XS sells for the same amount. And of course, Apple killed off its smallest and most affordable handset, the iPhone SE, right as it was introducing the most expensive iPhone yet.

But Apple wants you to know you have a choice. You get to pick from a very small pool of potential devices, but hey, at least you have options! Never mind that certain choices, like color, were predetermined for you by a room full of powerful tastemakers who decided to make coral or cerulean happen. Never mind that whatever you pay, it’s still a crazy amount of money for a phone. You are making the call. You, sir or madam, have your choice of new iPhones.

Phones are the most important computer in most people’s lives. They’re the only computer in many people’s lives. Nobody says it’s crazy to spend up to $1,500 on a laptop — but most people use and care about their phone more than they do their laptop. That’s why phone displays are getting bigger. We’ve been corrupted by thinking of them as “phones” in the pre-2007 sense of the word.

A cell phone used to be just a wireless telephone. No longer. They are our ever-present personal computers. They are also our most important cameras (and often our only cameras). A decade ago, point-and-shoot cameras ran $200-400, easily. It’s your watch, it’s your alarm clock, it’s your Walkman, it’s your map and GPS. It’s your wallet full of photos of your family and friends. It’s also, increasingly, your actual wallet.

If you took an iPhone XR back to 2006 people would be amazed. If you told them they could buy one for $750 they’d think you were lying.

Considering how much more capable an iPhone XR is compared to an iPhone 4, I’d say $750 is an amazing bargain.