The Fish Rots From the Head

But I think that’s partly why the article is instructive — because from Adobe’s perspective, I don’t think the Macromedia acquisition is much about Macromedia, either. What it shows is that the Macromedia deal is not a turning point in the company’s history, but instead an unfortunate result of a turning point they crossed several years ago.

John Warnock and Charles Geschke, Adobe’s bearded and boffinish founders, had invented PostScript, software that allows printers to reproduce text and graphics exactly as they appear on computer screens. It was followed by Illustrator, Photoshop and InDesign, three applications used by creative types everywhere.

But Messrs Warnock and Geschke were lovable technophiles who proudly intoned that they were not in it for the money. As a result, Adobe never grew anything like as rich or powerful from its revolution as other software companies, notably Microsoft, did from their own. The founders realised during the 1990s that Adobe had to outgrow its “garage” culture. So they gradually handed over the firm to Mr Chizen, who had joined Adobe in 1994 as a marketing — and decidedly not an engineering — talent. Tough, and with a large dose of Brooklyn chutzpah, Mr Chizen in 1998 turned Adobe’s culture upside down, introducing hierarchies, performance reviews and the like. In 2000, he became chief executive, and the founders co-chairmen.

That allowed Mr Chizen to return to his main passion, salesmanship, and in particular to a software application called Acrobat, the one Adobe product that has always been targeted at the wider business (as opposed to the narrower graphics-and-design) market.

The emphasis is mine, to highlight what I consider the key passage: that salesmanship is Bruce Chizen’s main passion. Not graphics, not design, not software development. Sales. It’s worth noting that just because The Economist says so doesn’t necessarily make it true, and it doesn’t mean that Chizen doesn’t also care about graphics, design, and software.

But it certainly rings true. And the fact that his background is in marketing — not graphics or technology, or, as in the case of Adobe’s founders, both — makes it almost seem like a statement of the obvious. Of course his main passion is sales: he’s a sales guy.

But Chizen’s rise at Adobe tracks precisely with the company’s drift away from its roots as a great software company. When the company was run by graphics/technology enthusiasts, it was a great graphics/technology company. Now that it’s run by a sales guy, it has turned into a company that seems more interested in the sales and marketing of its products than in the products themselves.

Chizen sounds as though he’d be happy selling any sort of software, and it just happens that his company sells design and publishing apps. His passion isn’t for creating great products; it’s for convincing us that Adobe’s products are great.

The entire “Creative Suite” bundle reeks to high hell of marketing for the sake of marketing. Rather than Photoshop 8.0, we got Photoshop CS. Instead of InDesign 3.0, InDesign CS. Now, with the next release of the Creative Suite bundle, we’re stuck hearing about bullshit version numbers like “Photoshop CS2”. “InDesign CS2” is the most egregious, given that the traditionally-version-numbered InDesign 2.0 came out just three years ago.

Adobe certainly isn’t the only company to play marketing games with their application version numbers. (E.g. Apple, who bumped iPhoto from 2.0 directly to 4.0 just to keep the version number in sync with the rest of the iLife ’04 suite.) But Adobe’s strikes me as the most egregious, especially since the core audience for the CS suite is comprised of the sort of creative professionals who are predisposed not just to ignore marketing bullshit, but to be downright insulted by it.

I know dozens of people whose livelihoods are based on creative work produced using Adobe software, and every one of them was at least mildly annoyed by the “CS” marketing nonsense. The entire “CS” campaign has the feel of a company that is marketing down to its customers, rather than treating them respectfully as peers. If it doesn’t appeal to their core audience, who is the “CS” brand meant to appeal to?

Bigger Instead of Better

The Economist emphasizes that Chizen’s efforts are focused on Acrobat and PDF; specifically, his efforts to turn them into a profitable “platform” for the business world. The article closes with this quote from Chizen:

But so what? What’s wrong with being a nicely profitable $2 billion-a-year company that dominates the software market for creative professionals?

And if they want to grow, wouldn’t it be more natural for them to grow in ways targeted toward other branches of the creative arts? Adobe dominates the print world,1 but they have never made a serious dent in the tools market for web designers (sorry, GoLive users). I mean, just look at their web site. Here’s a clip of their PR page announcing the Macromedia deal (or at least how it looks on my machine using Safari): 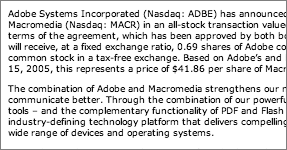 How is this anything other than wretched? In what way is it acceptable for Adobe Systems, the company that more or less invented digital typography as we know it, to publish a web site that borders on illegibility?

Speaking of typography, let’s not forget their FAQ on the Macromedia acquisition. For the moment let’s agree to let it slide that it was published as a PDF document rather than as a regular web page. At the very least, we should expect it to be a nicely-typeset PDF, right?

Alas, no. Instead, we get a document with abusively-tight leading (i.e. the lines are way too close to each other), a page footer set in Times New Roman, and crudely inconsistent use of proper apostrophes, quotation marks, and dashes. If it looks like a document composed in Microsoft Word on Windows, that’s because it was (at least according to the PDF’s own metadata).

Why not use InDesign? Why not allow a skilled page designer to typeset it? Adobe is arguably the world’s best typography company; both in terms of technology and the quality and quantity of faces in their type library. But if you didn’t know this, you’d never guess it by looking at the company’s crudely-typeset marketing material.

In the realm of motion graphics, Adobe was at one point doing well with Premiere and After Effects. But they allowed those products to stagnate, and Apple (and others) have swooped in and taken over the market.

An optimist might argue that Adobe has purchased Macromedia specifically to fill the web-sized hole in the product line-up, but I think it’s more likely they’ve done it just to get bigger for the sake of being a bigger company. Adobe does not have a good track record with acquired applications. E.g. they acquired PageMaker and it died; they created InDesign on their own, and it’s thriving. They acquired GoLive years ago, and while it’s still around and admittedly has its adherents, no one can argue that it’s successful in the way their print-oriented apps are.

And let’s not even mention what they’ve done to FrameMaker.

When ‘Sales Guys’ Take Over

Rather than expand into untapped creative markets, Adobe seems hell-bent on expanding into the jerks-wearing-suits market, a market that’s completely at odds with the creative market they’ve dominated for nearly two decades.

Adobe’s best and core products are their oldest, and they are graphics products: PostScript, the Adobe Type Library, Illustrator, and Photoshop. InDesign is relatively new but genuinely fits alongside these products. This is why Adobe’s core customers — who still use and love many of their products — are dismayed and confused by the company’s direction in recent years. But is it any surprise that a company that is run by jerks-wearing-suits is now targeting the jerks-wearing-suits software market?

For obvious reasons, Steve Jobs is not an unbiased source of commentary regarding what happened at Apple during his decade-long exile from the company. But I think he’s largely right that Apple’s biggest problem during that period was that it was run by “sales guys”. In a Newsweek article commemorating the 20th anniversary of the original Mac, Steven Levy wrote:

Even now for its 25 million users, the Macintosh is a source of passion. (Journalists know that a disparaging word about an iMac or a PowerBook will unleash a hundred flames from rabid Apple-heads.) Steve Jobs thinks he knows why. “In the modern world there aren’t a lot of products where the people who make them love them. How many products are made that way these days?”

If that’s so, then why is the Mac market share, even after Apple’s recent revival, sputtering at a measly 5 percent? Jobs has a theory about that, too. Once a company devises a great product, he says, it has a monopoly in that realm, and concentrates less on innovation than protecting its turf. “The Mac-user interface was a 10-year monopoly,” says Jobs. “Who ended up running the company? Sales guys. At the critical juncture in the late ’80s, when they should have gone for market share, they went for profits. They made obscene profits for several years. And their products became mediocre. And then their monopoly ended with Windows 95. They behaved like a monopoly, and it came back to bite them, which always happens.” 2

Does this not describe the general vibe of the Chizen era at Adobe?

Adobe is clearly behaving like a monopolist in the print and imaging categories. It strikes me as much more plausible that they’ve acquired Macromedia to strengthen their hold on the markets they already dominate than as an effort to expand into new markets like the web.

When is the last time Adobe has unveiled anything truly innovative for the graphics-and-design market? InDesign 1.0? That was nearly five years ago.

Like most sales guys, Chizen seems like the sort of person who believes that what matters most is not the quality of the product itself, but merely the marketing in which you package it. Marketing does matter, and so does salesmanship. But the main reason Adobe Systems has been a success is that they created and developed terrific, innovative software. Engineering talent isn’t enough; you need passion for innovative products at the top of a company.

If that spirit continues to wither, Adobe will continue its slide into mediocrity, and will become just another software company. But if it becomes a bigger company while doing so, I suspect that will suit Bruce Chizen just fine.