A few weeks ago I wrote about the Richard Solo iPhone/iPod Backup Battery — a small $50 external battery pack you can plug into an iPhone or iPod’s dock port to supply an extra charge.

As is plainly evident, the 1800 sports an entirely different industrial design: 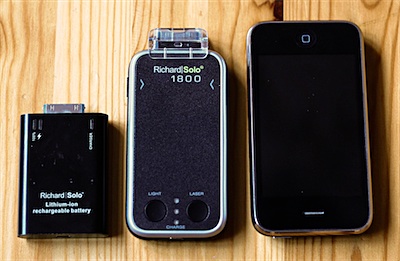 It’s still small enough to be easily carried in a pocket, but it’s about an inch and a half longer and slightly wider. Including the dock connector, it’s not that much shorter than the iPhone itself, and for some reason even seems designed so as to resemble a hypothetical iPhone Nano. It doesn’t feel much heavier than the original Solo battery pack, though. Latched to an iPhone 3G, it fits, just barely, in the front pocket of a pair of Levi’s.

In my testing, the 1800 stores enough power to give a nearly-depleted iPhone a complete charge. Starting with an iPhone that had already shown the “10 percent remaining” warning, the iPhone was back to about 25 percent within 15 minutes, 60 percent in 30 minutes, 85 percent after an hour, and fully charged (or nearly so) in about two hours. (These percentages are my eyeballed estimates from the lock-screen battery gauge.) In my tests, the original 1200 mAh Richard Solo battery only restored a depleted iPhone to about 70 percent.

The other major improvement in the new model is that the dock connector latches when connected. To release it, you need to press two buttons on the sides of the battery. The original model doesn’t latch, and I’ve found that it sometimes loses contact when connected to my iPhone in a pocket. I’d go so far as to say that the 1800’s latching connector is a more important improvement over the original than the increased battery capacity.

The 1800 also comes with two plastic support braces, one for the iPhone 3G and one for the original iPhone. The braces are intended to prevent stress from breaking the connector while the battery is latched to the iPhone.

To top it off, the 1800 adds two features that are clearly intended for the Sky Mall audience: an LED flashlight and a laser pointer. Seriously, a frickin’ laser. Well, why not?

The indicator lights on the 1800 are far more sensibly designed than those on the 1200 model. There’s (1) a blue light that indicates when the battery is connected to and charging the iPhone; (2) a green light that blinks while the Richard Solo battery is itself receiving a charge, and which lights up solidly when fully charged; and (3) a red light that blinks when the Richard Solo has below 10 percent charge remaining.

Like the original, the 1800 comes with a plastic cap to cover its dock connector when not in use. It latches, but it’s so small that I still expect to lose it. I’d gladly trade the flashlight and laser for a retractable dock connector. 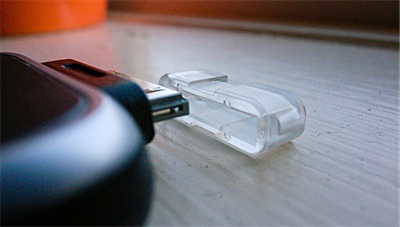 Also like the original 1200 model, the 1800 charges via a USB cable and comes with an AC power adapter. Unlike the 1200, the 1800 also comes with a dual-USB car charger. So for $20 more than the original, the 1800 offers 50 percent more capacity, a latching connector, a car charger, and a built-in flashlight and laser pointer. The only downside is that it’s physically larger.

The only other 1800 mAh iPhone battery pack I’ve seen is the 3G Juice, which appears to be physically smaller than the Richard Solo 1800, but which doesn’t offer a latching connector.2

If you already own an external battery pack for your iPhone, I doubt it’s worth it for you to buy this one too. But if you don’t own one already, I’d strongly recommend this one over the original 1200 mAh Richard Solo model because of the higher capacity and the latching connector.